The Mount Notre Dame (MND) community is ready to rally behind 2013 MND graduate and 2019 Team USA member Rose Lavelle by hosting a viewing party of Team USA’s first FIFA World Cup Soccer game on Tuesday, June 11 beginning at 2:30 p.m. in the school foyer. The MND community is invited to enjoy some snacks and refreshments beforehand with the live stream vs. Thailand getting underway at 3 p.m. The event concludes when the game ends at approximately 5 p.m.

Rose Lavelle was a four-year varsity performer at MND from 2009-2013, earning GGCL First Team Honors during her sophomore, junior and senior seasons. She was also named All-State as a junior and was the Cincinnati Enquirer Player of the Year her senior season. She went on to star at the University of Wisconsin, earning numerous Big Ten awards during her career and was the number one overall draft pick in the 2017 NWSL Draft by the Boston Breakers. 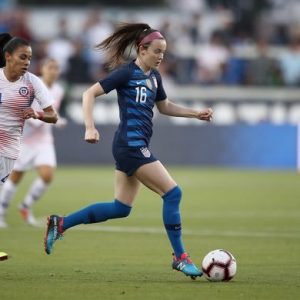